A one-sample t-test is used to see if the mean of a population from which a sample was taken differs statistically from a hypothesised value.

The null hypothesis in a t-test is that the population mean is equal to the hypothesised value, while the alternative hypothesis is that it is not. A two-tailed t-test is what this is known as. 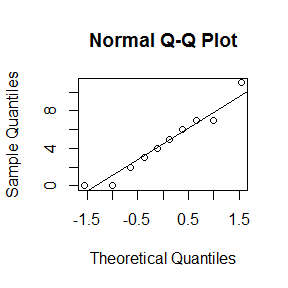 Example of one sample t-test in R

Let’s say we have a sample of values as follows:

R codes of one sample t-test

To perform the one-sample t-test in R, use the following code:

Now let’s analyse the output of the test:

The p-value is 0.5709, which is above the 5% significance level, therefore the null hypothesis cannot be rejected.

The t-value expresses the magnitude of a difference in comparison to the variation in the sample data. The higher the t-value, the more probable the null hypothesis is to be rejected. The t-value in our example is 0.57, which is a low value.

In a t-test, one degree of freedom is “spent” estimating the mean, so the degrees of freedom will be n-1 – the number of values in the sample minus 1 – which in this case is 29.