In statistics, A Random Variable is a set of possible values from a random experiment which is known in advance and the experiment can be repeated underer identical condition. According to Investopedia,

“A random variable is a variable whose value is unknown or a function that assigns values to each of an experiment’s outcomes.” 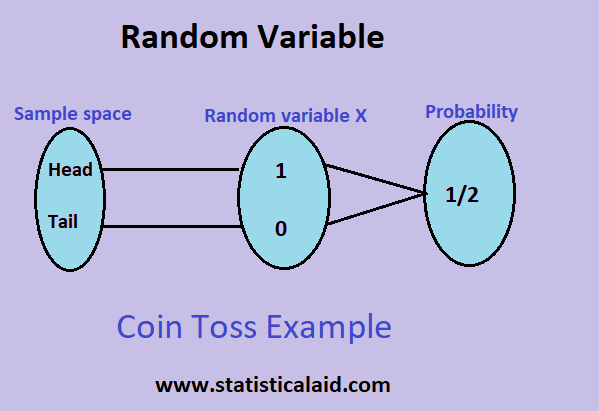 More precisely we can say that,

There is a rule that assigns a real number to each outcome (sample point) of a random experiment is called a random variable (r.v.). It is governed by a function of the variable. Hence, a it is a real-valued function X (x) of the elements of the simple space (omega) where x is an element of (omega). Further, the range of the variable will be a set of real values.

Generally, there are two types, namely

Say x is a variable, which can take a finite number of values in an interval of the domain, is called a discrete random variable. For example, if we toss a coin, the variable can take only two values 0 and 1 assigned to tail and head respectively, i.e.,

Let, A variable X, which can take any value in its domain or in an interval or the union of intervals on the real line, is called Continuous random variable. For a conti­nuous variable, the probability of a point is zero, i.e., P (X = x) =0.

The properties are following,