Convenience Sampling is a special kind of Non-Probability sampling, where sample will be choose randomly from population and there have also unrestricted term. For example, standing at a mall or a grocery store and asking people to answer questions would be an example of a convenience sample. There are no other criteria to the sampling method. But only the criteria is the person need to be participate. 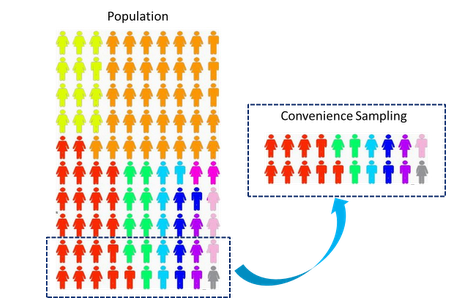 A gaming company that wants to know how one of their games is doing in the market one day after its release. Its analyst may choose to create an online survey on Facebook to rate that game. The major challenge of this approach will be reaching to the people who play games. As social media is a vast place, it’s always difficult to collect samples from the population of interest. Most people may not be interested or take the survey seriously while completing it, which results in sampling error. The survey may be improved greatly if the analyst posts it to fan pages dedicated to game-lovers. He may find a lot more people in that group who would be inclined to judge and rate the game critically.

Convenience sampling most often used is due to the numerous advantages it provides. This method is extremely speedy, easy, readily available, and cost effective, causing it to be an attractive option to most researchers.
Expedited data collection
When time is of the essence, many researchers turn to convenience sampling for data collection, as they can swiftly gather data and begin their calculations. It is useful in time sensitive research because very little preparation is needed to use convenience sampling for data collection.
Ease of research
For researchers who are not looking for an accurate sampling, they can simply collect their information and move on to other aspects of their study. This type of sampling can be done by simply creating a questionnaire and distributing it to their targeted group. Through this method, researchers can easily finish collecting their data in a matter of hours, free from worrying about whether it is an accurate representation of the population. This allows for a great ease of research.
Ready availability
Since most convenience sampling is collected with the populations on hand, the data is readily available for the researcher to collect. They do not typically have to travel great distances to collect the data, but simply pull from whatever environment is nearby.
Cost effectiveness
One of the most important aspects of convenience sampling is its cost effectiveness. This method allows for funds to be distributed to other aspects of the project. Oftentimes this method of sampling is used to gain funding for a larger, more thorough research project. In this instance, funds are not yet available for a more complete survey, so a quick selection of the population will be used to demonstrate a need for the completed project.
Another Advantages
·        Simplicity of sampling and the ease of research
·        Helpful for pilot studies and for hypothesis generation
·        Data collection can be facilitated in short duration of time
·        Cheapest to implement that alternative sampling methods